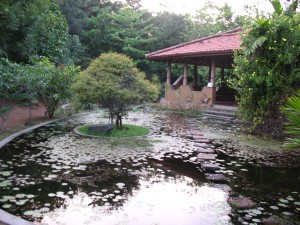 During my global journey, I interviewed 10 members in 14 communities. I found that ecovillagers, like people everywhere, are divided in their beliefs about God, spirit, or nonmaterial reality. Some spoke about being guided to their lifestyle by God, some spoke of communicating with plants and animals, and some described themselves as staunch atheists. Amid these differences, I was struck by the deeper commonalities, which can be summed up in one simple premise: that we are inseparable from nature. If we want to integrate the ecological, economic, and social dimensions of sustainability, then we have to integrate ourselves. Consequently, whatever our metaphysical beliefs might be, sustainability turns out to be an inside job.

While every community I visited was engaged in this inner work, its ripple effect was most obvious in Sri Lanka’s Sarvodaya Shramadana movement, which works with 15,000 villages. The name itself means “the awakening of all through the sharing of labor.” For Sarvodaya, all social problems—war, poverty, environmental destruction, the oppression of women—are rooted in human consciousness. The basis of its participatory development work is therefore a simple contemplation of the breath and one’s interdependence with all of life.

One morning, I struck up a conversation with one of Sarvodaya’s senior meditation instructors. “If we want to establish peace among ourselves and with nature,” he said, “we must first establish peace in our own minds.” Later that afternoon, the venerable gentleman taught me Sarvodaya’s simple but profound practice. During the meditation, even as I felt alive to every sensation—the sultry air, the sweat dripping down my belly, the sounds of traffic and birdsong—I also seemed to enter a vast stillness. Rather than retreating into an otherworldly bliss, I felt myself embedded in a web of air, water, sunlight, and relationships, both human and nonhuman.

I invite you to experience Sarvodaya’s peace meditation for yourself.